When we moved into our log cabin, the natural cherry kitchen had a hunter green tile counter. It was not aging gracefully. The grout was discolored, and practically every edge had a couple of cracked tiles. 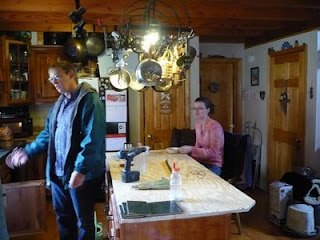 I was walking around the corner one day and ripped a pair of jeans!

We decided to do the demo ourselves, and save a little money. In the meantime, I was still in search of a plumber, but could only find one that would come out the day after the counter install. 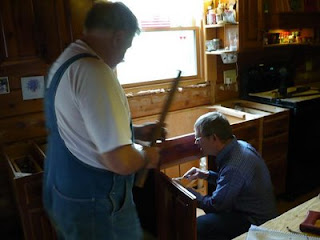 With a big event looming -- I did not see how I could be without water, much less a sink for a whole day. While at work, I got an IM from Papa John who advised that he had located a plumber. I called to find out what he was talking about and he told me that his buddy Steve and wife Lori were planning on being in town! YAY!

So the demo began. While the tile itself popped off pretty easily, what we did not anticipate was two layers of plywood, adhesive, and copious nails. I swear someone had a nail gun and used the plywood for a little therapy session. 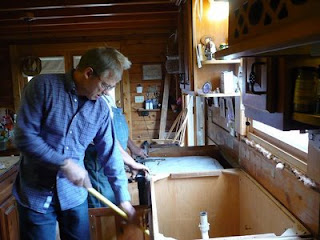 Here is John saying "What were we thinking?" 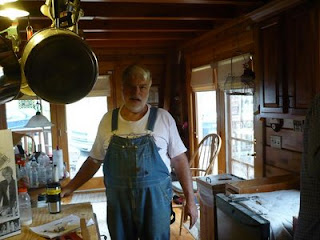 Once the counters were in, it was time to get the plumbing connected. 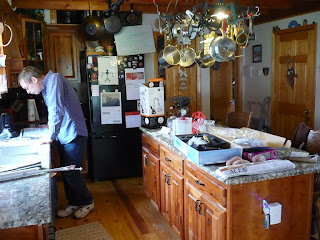 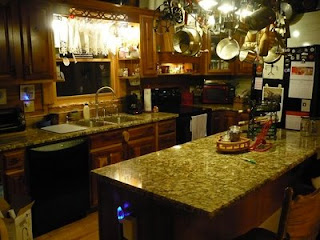 The completed kitchen is absolutely georgeous!
Posted by FarmGirl

It looks like a kitchen you would see on TV! Very pretty!

By the way, please don't go another month without posting!! I need my blog fix! :)

Hi, We are sifted our new home next month. So I need some kitchen accessories for decorating and set up my kitchen. Recently I visit this site and saw lots of kitchen accessories. If you had more insight into it, I would much appreciate it. Thank you.

You have given essential data for us. about commercial interior remodeling services arlington heights It is excellent and good for everyone. Keep posting always. I am very thankful to you.

You wrote this post very carefully.Genuine Epoxy Coatings for Commercial Floors Kitchener The amount of information is stunning and also a gainful article for us. Keep sharing this kind of articles, Thank you.