Well January certainly wizzed by.  We got decorations down - lights and all, and started preparing for kids to arrive. Boy did they start arriving.  We had one doe after another go into labor, by MLK day, we were knee deep, and still they kept coming.  We had to assist in quite a few of the births this year.  Cheyenne had quads again and the first one presented with 2 hooves out and head back.  I ended up pushing the baby back in and sliding my hand in to reposition the head so the nose came out with the feet.  The next one was breech, and tried to come out hock first.  Pushed him back in and grabbed hooves.  After the first two, the other two slipped on out.  Next up was Buttercup, she had a great big doeling.  Seems like the singletons are always big.  First out were hooves and a tongue. I had to help pull that one out she was so big.  Then came Bambi. That was an accidental breeding.  She was a spring kid and should not have been bred.  Knew it would be a struggle, and it was.  For the first time I had to use an OB snare, I just could not get a grip on the hooves.  Pulled like crazy until the head delivered. I'll never let that happen again.  We let Bambi keep her little doelng for three days, until we saw how nursing that giant kid was affecting her body condition.  So Bambi went back out with the herd and went back to being a kid.

So that's how we ended up with 21 kids in the nursery! 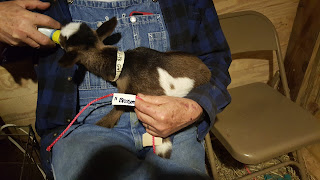 We also got another project finished over the holidays, and got the roof on over the weekend.  We have a nice little overhang that protects the glass doors. 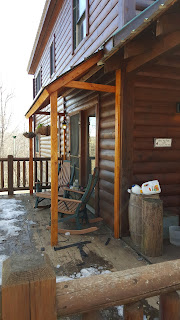